New Book, the Story of Babukishan's life in the, "Oldest Living Lineage and Pioneering family of Baul who opened the door for all Bauls to travel the world."

"The roots of Baul, this Legendary Lineage of Baul is the oldest "Baul Living Lineage" on earth. This is the "Nabani Das Baul and Brajabala Dasi" Lineage. It is thousands of years old. This lineage brought Baul to the world in the 1950's otherwise who would know anything about Baul. They opened the door for future Bauls.


It was this lineage that did all the leg work back in the 60's, 70's, 80's and 90's traveling to every corner of the world, teaching, lecturing at universities, demonstrating their Baul lineage, performing from Carnegie Hall to the Royal Albert Hall to all the biggest stadiums in India and around the world in front of millions of people, including the Nitaji Indoor staduim, and Salt Lake staduim in Kolkata and the Bombay Stadium in Mumbai, Mahajadisadna and Rabindra Sadan, Tata Auditorium, Nehru Auditorium, Sri Ram Auditorium, Teenmurti Auditorium in from of the Indian President, Prime Minister and all cabinet ministers, in the Knitting Factory in New York, Studio 54 New York Babu was the guest artist.. ...the list is endless.


This lineage, this family has performed at festivals in India and around the world hundreds of times over and over for more than 40 years. Babukishan has performed at more festivals than perhaps almost anybody on this planet, this he started with his grandfather, then his father and mother in the 70's, 80's, 90's. ..the list is endless and he performed with all top Indian musicians and western musicians in every corner of this planet.


They have been recorded by the biggest music companies, on television in documentaries, and in movies including the movie made in 1986 called Tagori about Babukishan's Aunt Radharani Dasi. They are legendary, this is legendary and historical. They have written books, been interviewed by all the top scholars and associated with the top in every field of society. It truly is an amazing story of struggle in the days before we had the internet, today it is easy to say anything, or even do anything, think how difficult it was for this pioneering family to introduce Baul to the world, when hand written letters were the only way to make contact, even telephone was too expensive to call oversea's. Language was also a problem, these were sanskrit speaking, bengali speaking people, Babukishan learned english to communicate with the world and did all the letter writing.


This is the Lineage of Sri Nityananda of Ekchakka, Birbhum West Bengal India. "Baul is the poetry of the the dancing bee that tells us where the honey is." based on Indian Philosophy, Indian shastra, Yoga, Shakti-sadhana, the science of light and the science of life, flavoured with the juice (Rasa) of Buddhism and Sufi. Bauls accept all, love all, serve all. Other people talk about themselves, Bauls sing about everybody, and include all, in all religions, they talk about all religions, they are not fundamentalist or othodox saying this is the way. They say all ways are paths to God/dess, all people are great, and the Baul path is the a path based on the ancient sadhana's of India, flavoured with he best honey of all.
This is the Baul lineage who introduced Baul to the world, this is the lineage who did all the leg work, so that today anybody can be a Baul. They already spent many decades traveling, lecturing at Universities, and singing since the 1950's, many eminent people around the world would visit Nabani Das Baul in Shantiniketan West Bengal. 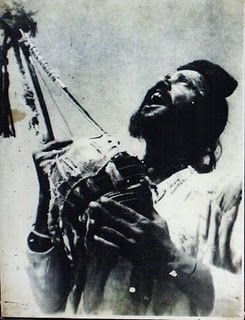 Nabani Das Khyeppa Baul, Lineage Baul from a many thousand year old oral living lineage. Nabani Das is Babukishan grandfather, and his initiating Baul Guru, he spent the first 8 years of his life learning and being initiated into Baul.  Nabani kept Babu when he was born, massaging his crocked limbs and carrying him as his baby Krishna all over India. Through his grace Babu had darshan with all the great Saints of the 60's. Babu was at his side when he left his earthly body and he had a very profound initiation at that time and vividly recalls everything Nabani said to him.


These stories of Babukishan's early life, living with his grandfather and grandmother, Nabani Das Baul are stories legends are made of. Babu was taken to Kolkata where he lived as a monk at the Ramakrishna mission for 12 years. His life living with Purna Das Baul and being reaquaited with his famous birth family in Kolkata, and recieving the gift of Purna Das Bauls Baul teachings. This is the a rare story of a kid who learned sanskrit orally from birth and developed a photographic memory, enough so to remember everything about his lineage, and who is who in Bengali history. This is a story of traveling, lecturing at universities, performing with the best of the west including Bob Dylan, the Rolling Stones and George Harrison of the Beattles the list is endless.


This is a ledgendary true story of lineage, early fame, of disappearing to Bombay and recreating himself under the name Babukishan, of his beloved Guru and the rare deep loving connection beyond this world, sacrifice, seva, struggle and sadhana of an oral tradition of over 10,000 songs.. This is a legendary story that will take one into the inner circles of Indian spiritual life and cultural life, from the top to the bottom, in India during the 60's, 70's, 80's, it is the story of all famous Indian musicians, guru's, and initiations. It is the legendary story of a kid who never fit into to regular life no matter how he tried. It is the story of Babukishan's struggle to preserve his lineage and create, preserve his guru, his grandfather Nabani Das Baul's legacy over a 40 year period. To be published soon. It is the story of the first Baul to ever recieve a modern education, of a Baul who is successful as a Indian Cinema composer, of betrayal and ultimately of the first and only Baul to ever immigrate to Canada or live in North America.


This Legendary Baul family is the Oldest Baul living lineage on earth and it is the  Nabani Das Baul Lineage (Jai Nitia) and before that thousands of years, they are the ones who brought Baul to the world and opened the door for future Bauls now everybody can be a Baul...Baul is for the world and its time is now, they ebrace all, accept all. Everybody does sadhana, Baul is type of sadhana that needs to be preserved for future generations.
Posted by Trishula Das at 10:07 AM
Email ThisBlogThis!Share to TwitterShare to FacebookShare to Pinterest
Labels: babukishan baul, Baul archive, baul lineage, baul songs, nabani das baul
Newer Post Older Post Home