Preserving Baul in a new world of Internet Marketing Masters!

You may ask how? By the deconstruction of Baul cultural teachings, the deconstruction of the history and her-story of the indigenous Bauls. No one in this world would know anything about Baul if not for  this one and only  lineage.  They are the pioneers of Baul. They brought Baul from the villages of Birbhum to India and then to the world.

You can not make this up, the demise of the authentic Lineage of Bauls ! The Essence the living lineage, is not in who can get the most likes on facebook.

Nor is it in being a facebook Marketing Master?

Baul is in the 'Essence of a living lineage' (from a line that is as old as when Krishna walked the earth some 5,000 years ago). The essence is not in Baul actors, tourist attraction jokers (the fake it til you make it ones), the exotic dress and hair, do not make a Baul! The one who says, Baul is not from Family, is 1000% wrong and trying to usurp Baul to fit their lack of respect and lack of Baul Wisdom.

Baul is not about a fake crying devotion, or a twirling jata performance. Baul is a lived tradition, from an authentic lineage, not a fake made up lineage?? A lineage that has in it a shakti so strong, a mystical lineage, not an acting lineage of one generation that never existed until Babu started talking about his lineage?

Commandeering, expropriation, seizure, takeover, usurpation, annexation, attachment, confiscation, grab, reductionism, watering down, reducing, riding on the coat tails, of the ones who created a road. This one and only pioneering lineage who did all the leg work, who wrote the books from inside the tradition way before any of todays modern drama actors were even born!! Who wrote the poetry, who started to travel all of India for decades. Baul is only from Birbhum, when Babu Kishan went to Bangladesh in the 1970's there were no Bauls in Bangladesh.
Babu Kishan was the first to bring Bangladeshi famous singers to Calcutta and record them singing Lalon Fakir Poetry, before that no Lalon poetry was recorded in Bengal and that was in the 1970's. Lalon is a great Poet but he is NOT a Baul, he did not do Baul Sadhana or know the inner Baul, he was a poet.
Who promoted and introduced the world to Baul? This pioneering lineage and they started in the 1950's, they were the first and only Bauls to travel and the ones that came after, went where they went, followed what they did, dressing as them and singing their poetry and meeting their friends?
Who took their names off and adding their own names as if they are were the ones? Who created a new lineage that does not exist but copies everything Babu Kishan does? I will tell you who in the new book, Babu Kishan's 4th book.
Singing this lineages songs but saying they are your own or just randomizing the songs saying Baul does not care because you do not know or are just stealing the songs because you created a lineage that does not exist, name the Baul Masters, saying Baul Masters for everything is making Baul Generic and random, which is wrong? Baul has been archived and the real Bauls are gone, with only a few who know the true Baul, there are not even hundreds or thousands that is complete lie.
Not properly educating what exactly Baul is, teaching wrong teachings, as I said they make it up as they go, there are not 4 or 5 types of Baul and common sense will tell anybody that Baul is NOT Sai Dervish Fakir, those are Muslim and Baul is not Muslim it is Tantric Vaishnava the path of the Avadhut, oral Sanskrit not Urdu??
Baul is from family and they adopted others and it is not from any belt in India, Baul is from Birbhum Bengal and they have a specific dialect of Bengali. I am happy to report because Babu Kishan was raised hearing and remebering oral Sanskrit he has an ear for music and languages and has composed music in many Indian languages, he can tell who is from where.
Not all do this but some do, bragging they are pioneers and the only Baul Women to do this and that. How could Manju Das be overlooked, how could this lineage be over looked. No more truth will be told.
Intellectual Property Theft (Songs from this Lineage, used without giving credit, songs cut down and the singing style changed, singing and dancing Ektara, Baya, and Nupoor - Nabani Das Khyapa Baul style without any understanding that they are copying his style. Nabani created and danced a certain way, all Bauls follow Nabani Das Khyapa Baul and make like it has come from another made up lineage. This is hurtful and it is cultural appropriation. Baul is extinct and this has to stop, please be respectful.

​The diluting of a small group of people from Birbhum, the appropriation by from Bangladesh and outsiders who erase names and stories, claiming them as their own, repeating wrong things scholars have written about Baul and singing folk songs calling them Baul songs. 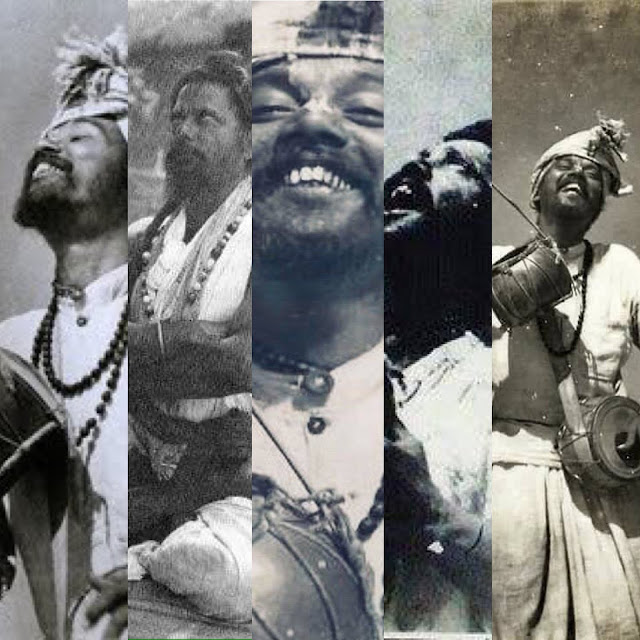 Babu Kishan aka Krishnendu Das @ 22 - he is almost 60 years of age.
At 22 he already had preserved most of Baul.
There is not need for others to fundraise in the name of Baul, especially when they are NOT Bauls and their Guru is Not a Baul Guru!! In today's internet world you can dupe many outside the tradition and collect people because nothing they say is qualified, they make it up as they go, the fake it til you make it actor Bauls.
At age 13 Krishnendu was awarded the youngest successful Music Composer of his time in the early 1970's, from that time he composed all of his fathers music. He was born into his Grandfather and Guru Nabani Das Khyapa Bauls lap and lived with him for 8 years in Birbhum before living with his father Purna Das Baul, he is the eldest Grandchild and eldest son of Nabani. 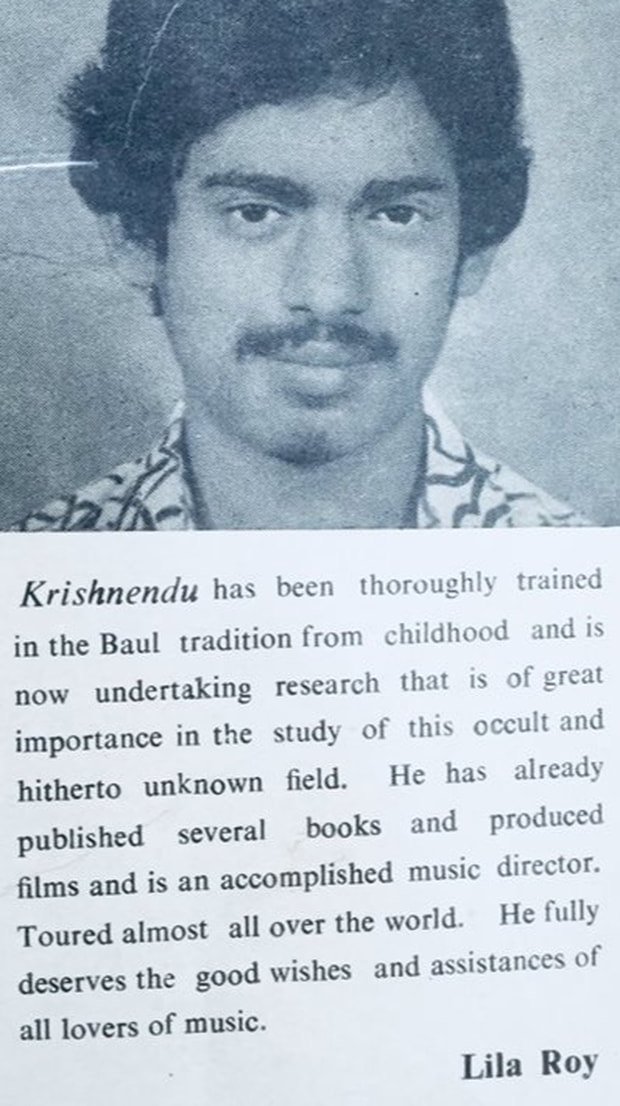