Babu Kishan aka Krishnendu Das Baul, the pioneer creator of Baul Fusion since 1975!

#BabuKishan made the #International #Connection again, after 1967 #woodstock  connection with Bob Dylan and The Band!!

In this picture he met Garth Hudson of 'The Band' had arranged to meet me at #CentralHotel #NewyorkCity 1980’s. After that I arranged for him to meet his parents, as I brought them to Woodstock to meet Garth Hudson. And to record 8 Baul songs on an album Garth  and  I were jointly producing.

This was the early 1980’s, 8 songs were 'Baul Fusion' songs. I had already composed and recorded the first Baul Fusion songs in the 1970’s, I was the first to do #Baulfusion by 2 decades when other just started but are now claiming they are the first to compose Baul Fusion? All Bauls follow this lineage, Das Baul and Dasi belong to this lineage and many wear the colourful patch work dress I designed for my Dad back in the late 1970's of course copying my style and whatever Purna Das Baul, wore, sang and where we went, even contacting and out biding our contacts, saying I will do it for free or donation?

Babu Kishan produced and composed Fusion Music with #TheBand  @ Woodstock, New York and met #BobDylan @ #madisonsquaregarden #NewyorkCity. Who I already knew and he kept asking me, Where is Laxshman, my uncle and the other Baul on the cover of Bob Dylan's album 'John Westley Harding', whom he obviously had a deep connection, a Life long connection in Bengal" where Sally traveled often through the 1960's until her passing March 11, 2021. RIP Sally, I knew her my whole life, she was a big part of my life in the USA and in India, a personal good friend.

In 1985 I was on stage with Bob Dylan and The Band for approximately 30 concerts around USA and jammed with the Band all the time, I was there singing Allen Ginsbers's only Baul poetry ever written in honour of my Grandpa Guru (Boro Baba) Nabani Das Khyapa Baul.

“Baul of Bengal, I sing for all,  Blue Danube is my Jamuna,  Hudson my Vrindavan, see me in Calcutta, Toronto and London,  Hear my call Baul of Bengal,  Same man many names,  same player,  many games,  Love is magic to win at life,  Hear my call O Baul of Bengal.”
By Allen Ginsberg, given to Babu Kishan in honour of Nabani Das Khaypa Baul
Baul Fusion 1985- Poetry by Allen Ginsberg
https://bhavaproject.weebly.com/news-blog/allen-ginsberg-and-babu-kishan
Sung by Babu Kishan, presented on the stage with
Bob Dylan & The Band during the 1985 tour of USA Approx 20 and way more jamming all the time "

Yet, to this day people are making up stories?

Garth Hudson used one song out of the 8 songs we recorded for Garth Hudson's and Babu Kishan collaboration album #theseatorhenorth #album.

I, also invited my good friend, the late Tabla player #BadalRoy to be on the recordings.

I invited two from #brooklynHareKrishnaTemple, one is a Kirtan singer now. 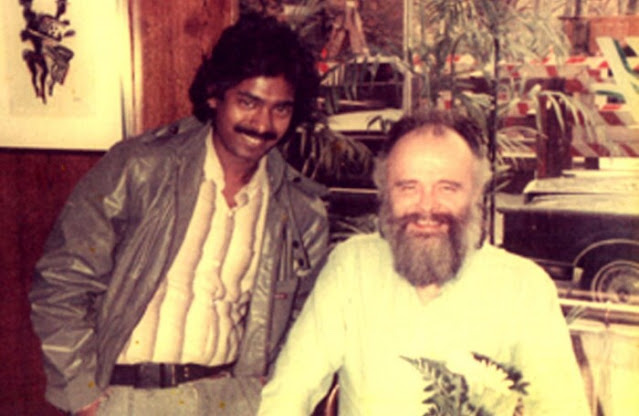 After the ablum was completed Garth Hudson invited me to come to New York as a 'Special Guest' for the release of his album ‘Sea of the North’ because I worked on the album and he used one of my songs from the previous recording in Woodstock New York.  This record release party he had asked me to attend as “special guest’.

I had also organized all the Baul fusion music for this album which was recorded at Albert and Sally Grossman’s #BearsvilleTheatre.

Sally Grossman was always very helpful to me, and she was very helpful to me, we were good friends. She arranged a ten year Visa for me, whatever I needed she always provided. Sally was my very good friend, it is interesting on fb she always told me that I am the only one who deletes her all the time, and all these other Bauls who do not even know her, are wanting to be her friends.

Garth told me he would send one ticket for me, I told him I was too busy working at CBS and releasing 3 Big Bollywood films all at once. I suggested that my father would come and have Garth call my father and invite him to stand in for me.

We talked after Garth had invited my father and I decided I could be there for 4 days only and he agreed for another ticket but I was coming a few days later, then I received a surprise phone call from Garth, and found out the my youngest brother had gone with my father to New York without telling me, not a word, they did it under the knee and I was surprised. I was so busy that I just decided not to go because my youngest brother had used my ticket and I could not, would not ask for another ticket.

I had to laugh because my youngest brother took pictures with Garth Hudson acting like he did music for this album? Now posting pictures of himself, acting like he was the one who produced the music, when in actual fact he has no musical ability but is always posing, duping people as if he is the next coming of Purna Das Baul.

He never took any interest in Baul or Music but now using, all the old pictures that I took, acting like he is a hero.

My youngest brother is very tricky and obtained ticket money from Garth in NY, he never ever told me he used my ticket?

I worked very hard to build a concrete #Platform for all Bauls and for the next generation. They are now dancing and singing our Baul songs as they travel around the world. Yes, my father went first couple places because he is the son of Nabani Das Khyapa Baul who was a renowned authentic Baul, but all the groundwork was completed by myself as my fathers music composer, producer and arranger, manager all around the world. My mother Manju, a legendary Baul woman, the pioneering Baul women who started travel for Baul Women, was so helpful to me, we made a great team.

It was not easy to create this platform, the first time in history for Baul to travel outside of India and all over Europe, Asia, North America, as Lineage Bauls. Not easy making contacts performing on the biggest stages, teaching at Universities as I set all this up by myself. We are the pioneers, I created the template by letter writing, some telephone calls but it was expensive. In those days we did not have emails or internet, fb or instagram, Indian people did not travel as much as they do today. Time was much slower, today anybody and everybody travels.
https://bhavaproject.weebly.com/news-blog/archives/11-2018
Scroll through a few blog posts to get to blog posts regarding Bob Dylan and Babu Kishan's associations, with Dylan, The Band, Allen Ginsberg and George Harrison.
'Baul Fusion' with Brian Wilson of The Beach Boys!
Babu Kishan Baul fusion goes all the Way Back to 1975
#BhabaPagla #Singapore
#facebookindia #facebooknews #facebookpost #hastagkdbabukishan #europe #canada #usa #russia #australia #thehindu #indianexpress #saregama #anandabazarpatrika #toronto #california #delhi #westbengal #kolkata #mumbai